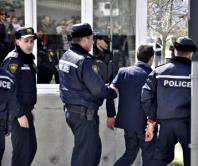 TBILISI, DFWatch–Four environmentalists were detained outside the city council building in Tbilisi on Wednesday.

The four were demonstrating against the project Panorama Tbilisi, which involves constructing a new cable car and several buildings in the old part of Tbilisi.

Representatives of Guerrilla Gardening Tbilisi told DF Watch that police detained four of their members during the rally and took them to the police station at the airport highway.

One of the detainees is Nata Peradze, one of the most active members of Guerrilla Gardening, a group most known for spending almost a year in Vake Park protesting against the construction of a new hotel in the unique green lung in the western part of the capital.

Tbilisi City Council was to review the Panorama Tbilisi project on Wednesday. Guerilla Gardening called on people to block the council from reviewing it and demand to have public debates about the project before it is approved.

Environmental activists wanted to attend the debate, but got involved in a verbal confrontation with council members, many of whom were forced out of the session hall.

Independent council member Aleko Elisashvili from Saburtalo said he supports Guerrilla Gardening and wants the issue to be subject to be process of public hearings.

The project will cost more than half a billion USD and will involve constructing a new cable car through the historic parts of Tbilisi, planting about 30,000 trees and building a new car park.

The project has many opponents among environment activists and Tbilisians in general. In social media, people evaluate the project as ‘tasteless’ and improper, placing the historic part of the city among ‘ants running in the sky.’ Some compare the project to Chiatura, which is a manganese mining city in western Georgia, known for its Soviet architecture and cable cars.

Another argument is that the project threatens the authenticity of the ancient city. Many would prefer to spend this money on rehabiliting the city’s old districts.

Guerrilla Gardening Tbilisi thinks that before carrying out such a large scale project there should be an impact assessment, which hasn’t been done.