Four detained in outburst of violence outside Tbilisi court

Four detained in outburst of violence outside Tbilisi court 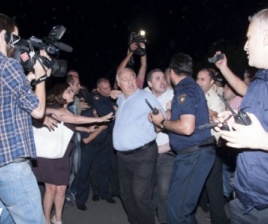 Former Member of Parliament Kote Gabashvili was one of the detained National Movement supporters. (Interpressnews.)

TBILISI, DFWatch–Supporters of the National Movement were Friday night involved in a violent disturbance outside Tbilisi City Court, after it decided to place former Mayor Gigi Ugulava in pre-trial detention.

Several of its representatives were detained by police and physically tried to prevent police from doing their job.

The party that held almost absolute power in Georgia for a decade raised new calls about being subject to persecution by the government coalition only days ahead of a run-off election in the capital to fill the post Ugulava has held for the last four years.

MP Levan Bezhashvili and former MP and ambassador to Italy, Kote Gabashvili, as well as two other activists were detained.

Party supporters sat through the five hour long court hearing which ended at midnight. The violence began after the court had read its decision, and four prosecutors were walking out of the building escorted by guards. Supporters of Ugulava ran after them yelling.

Police intervened, detained Gabashvili and forced him into a police car. Supporters of Ugulava tried to prevent the patrol car from leaving. Then Bezhashvili was detained.

Gocha Darjania and Davit Gogokhia were also detained. They are members of Free Zone, an organization of pro-UNM activists who has earlier claimed that the torture charged former minister Bacho Akhalaia is a political prisoner.

One other member of Free Zone, Lasha Rukhaia, was taken to the hospital with minor injuries.

Interior Ministry spokesperson Nino Giorgobiani said the four who are detained are suspected of hooliganism and resisting the police, violations which may be punished with fines only.

Bezhashvili was allowed to go home while the rest remain at the police station.

Zurab Japaridze, a member of parliament for the National Movement, claimed that the reason Bezhashvili was detained was that he insulted former Prime Minister Bidzina Ivanishvili, a businessman who brought together the coalition currently in power.

Japaridze explained the motivation behind the violent outburst as making a stand against what they claim is intimidation by the government.

“If someone thinks that they are able to scare someone by these detentions and arrest of Ugulava, their hopes are in vain. It is impossible to weaken us,” he said.