Four dead bodies discovered in Georgia near border with Turkey

Four dead bodies discovered in Georgia near border with Turkey 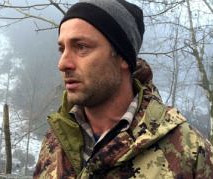 Vladimer Gogidze found the bodies while he was out hunting with a friend. (Interpressnews.)

TBILISI, DFWatch–Four dead bodies were discovered in Khelvachauri in southwestern Georgia on Saturday, four kilometers from the border with Turkey.

The four bodies were frozen and almost covered in snow, and allegedly belong to citizens of Bangladesh.

Vladimer Gogidze, a hunter who found the bodies, told journalists that he was out in the forest with his friend hunting for quails when he noticed traces of humans in the snow.

The bodies were sent to Batumi for identification and forensic examination.

According to Temur Didmanidze, a spokesperson for the local authorities, there were no traces of violence or injuries on the bodies. The four seem to have died three or four days before they were found.

Didmanidze assumes that they were trying to enter Turkey outside of the border crossing.

Police are investigating the case under article 115 of the Criminal Code about bringing someone to the point of suicide.

Locals in the village Maradidi, where the bodies were found, say people often get arrested there for attempting to cross the border illegally.

On Sunday, police arrested ten persons for attempting to cross the border with Turkey illegally. The ten were discovered at Kartsakhi, in Akhaltsikhe, in the southern part of Georgia.

According to the Interior Ministry, the ten wanted to enter Turkey without passing through border control.

Police are investigating the case under article 344 of the Criminal Code about illegal border crossing.