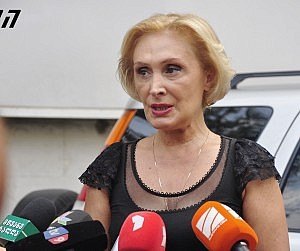 TBILISI, DFWatch–A former vice speaker of parliament in Georgia has been sentenced to four years in prison.

Rusudan Kervalishvili (62), who served as vice speaker of parliament in 2008-2012 representing the National Movement, was detained inside the courtroom after the verdict.

Prosecutors accused her and the other founder of the construction company Center-Point of embezzlement of over GEL 11 million of customers’ money, affecting more than 6,000 people.

Kervalishvili is also one of the most successful women in business in Georgia.

The former vice speaker was on trial together with her sister, nephew and others. Her sister was also found guilty and sentenced to four years in jail.

Maia Rcheulishvili is the wife of Vakhtang Rcheulishvili (64), a former head of the Georgian Socialist Party and also a former vice speaker of parliament in the 1990s and early 2000s.

Center-Point is one of Georgia’s largest construction companies and was founded by Maia Rcheuilishvili and Rusudan Kervalishvili. The company is notorious for collecting advance payments from customers in order to build blocks of flats, but a large part of the customers have not received their flats.