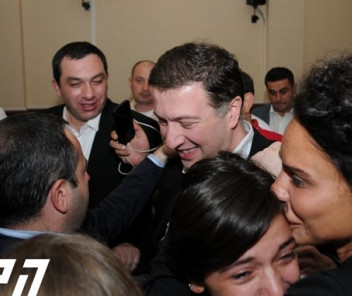 Upon his release, the most prominent leader of the Georgian opposition vowed to challenge “Ivanishvili’s grip on power”.

He said the National Movement will replace the current government and ‘get rid of’ Bidzina Ivanishvili, the billionaire who brought together the Georgian Dream coalition, which is currently in government.

Ugulava is now the only of the party’s heavyweights who is free and in Georgia. Leader Mikheil Saakashvili is in Ukraine, and former Interior Minister Vano Merabishvili sits in prison.

The ex-mayor’s release came a day after the Constitutional Court ruled a passage in Criminal Procedure Code unconstitutional, relating to the maximum term of pre-trial detention.

The Constitution says that nine months is the maximum, but the passage now declared unconstitutional says the time limit may be extended based on other charges.

After the Constitutional Court’s ruling, Ugulava’s supporters and family expected him to be released, but officials claimed that a common court first had to make a specific decision.

That decision was made Thursday night by the city court in Tbilisi at a hearing that lasted long and was interrupted by many breaks. The city court announced that its ruling was based on what the Constitution Court had said Wednesday, that the Procedure Code allowed detaining a person more than nine months, while the Constitution clearly says that the maximum term of detention is nine months.

“I have a feeling that Ivanishvili hasn’t finished fighting me,” Ugulava told Rustavi 2 after the hearing. He added that the authorities will use any opportunity to confront him again.

“They will prepare for revenge, and I am not afraid of revenge.”

Tbilisi City Court had another hearing Thursday morning about a charge against Gigi Ugulava regarding Rike Park, but the hearing was postponed until Friday, when the court is expected to announce the sentence in that case.

The former Mayor was detained at Tbilisi airport on July 3, 2014, as he was on the way to Kiev. After spending 440 days in jail, his troubles are not over yet: He still faces several criminal charges including corruption.