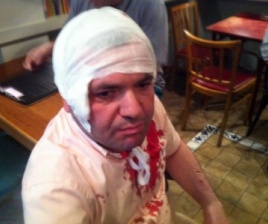 TBILISI, DFWatch–Ex-Mayor of Tbilisi and National Movement member Zurab Chiaberashvili was attacked in the cafe in Tbilisi on Tuesday.

The attackers allegedly were Rezo Tabukashvili and director Giorgi Mgeladze.

Chiaberashvili told journalists at the hospital that he and theology professor Nodar Ladaria, who is a supporter of the National Movement, went to a café when 10-15 minutes later, Rezo Tabukashvili and Giorgi Mgleadze arrived.

“Rezo Tabukashvili held a cup of tea and spilled the hot tea in Ladaria’s face, and then he hit me twice with the cup so I wasn’t even able to get up,” he said.

The only thing the attackers said was ‘how do you even dare to walk in the street,’ Chiaberashvili added. Then they ran away.

The former mayor has injuries to his head, but left the hospital the same day. He later said that he doesn’t know the attackers personally. He said the only motive they could have had is that they were unhappy with his political activity.

He drew attention to a recent attack on Member of Parliament Nugzar Tsiklauri, and said Tuesday’s incident is a result of the fact that the previous attack wasn’t properly investigated.

Ladaria said it was an impudent and unexpected attack, which he has difficulty explaining.

“I don’t have relations with this type of people and their names and surnames don’t mean anything to me.”

The Interior Ministry has launched an investigation pursuant to the criminal code, based on suspicion of deliberately causing bodily injury.

Justice Minister Thea Tusulkiani, who also chairs the interagency commission on elections, condemned the attack on Chiaberashvili and called on law enforcement bodies to react effectively.

She said the attack will be discussed at the interagency commission’s session on May 29.

Later Tabukashvili and Mgeladze surrendered to the police and soon after released on bail.

Lasha Tabukashvili, father of the assailant, told Interpressnews that his son would ‘take all responsibility before the law’, but added that Tabukashvili is the only culprit and that Mgeladze is completely innocent.

Zurab Chiaberashvili worked as reporter for Georgian daily Rezonansi and then became executive director of International Society of Fair Elections before siding with the Rose Revolutionaries of Mikheil Saakashvili in 2003.

After the revolution he took up a position as chair of the Central Electoral Commission and was then appointed Tbilisi mayor in 2004. He was highly unpopular among Tbilisi residents and also allegedly confronted the powerful interior minister Vano Merabishvili. This led to him being replaced by Gigi Ugulava and appointed as envoy to the Council of Europe in 2005, a post he held until 2010.

In May, 2013, Chiaberashvili was arrested along with his former rival Vano Merabishvili, for diverting budget money, found guilty by the court in 2014 and fined 50,000 laris (USD 28,000).