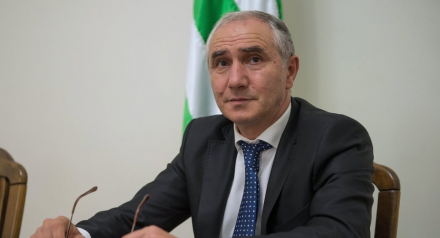 Bganba was first appointed at the office in September 18, 2018, after his predecessor, Genadi Gagulia, was killed in a car accident on the road connecting Sokhumi with Russia’s Sochi when he was returning from his trip to Syria.

He formally stepped down on October 10, after Khajimba’s inauguration.

In 2014, from May till September, he served as an acting de facto president of the Sokhumi regime.

Valeri Bganba, 66, served at various bureaucratic positions, including as a second secretary of Gagra Komsomol, in Soviet times.

Komsomol was a youth political wing of Soviet Communist party. Komsomol activists were part of notorious Soviet nomenklatura, a group of people holding high positions, and benefits, in the USSR bureaucracy.