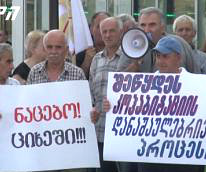 Demonstrators in Batumi don’t want any ‘cohabitation’ between the Saakashvili regime and the current government. (Interpressnews.)

TBILISI, DFWatch–Former political prisoners and refugees from Abkhazia held a rally in Batumi on Sunday outside the prosecutor’s office in Adjara to demand the arrest of Supreme Court Chairman Kote Kublashvili and the dismissal of Chief Prosecutor Archil Kbilashvili.

Ada Marshania, leader of the Alliance of Patriots, the organization which organized the rally, claims that the so-called cohabitation process is a ‘crime’ and must be ended, because when people voted for Georgian Dream on October 1, 2012, they voted for restoring justice and not cohabitation.

“Red card to Kublashvili-Kbilashvili, because they have become a duet,” Marshania said, quoted by Interpressnews. “Cooperation with criminals is unacceptable for our nation.”

He said he voted for restoring justice in October, 2012.

“Ten months after the election we have to give a red card to Archil Kbilashvili, unfortunately. As for Kublashvili, his impeachment should have been started a long time ago,” he added.

Archil Kbilashvili represents the Georgian Dream coalition, which won the parliamentary election, while Kublashvili is from the defeated National Movement.

Refugees from Abkhazia demand that the government to carefully studies the issue of resettlement.

“We, refugees, are left out of attention. We appealed to the court after resettlement, but have still not received a response from the court,” one of the protesters said, adding that the actions of the former refugee minister Koba Subeliani must be carefully studied as well.

The former political prisoners think that Supreme Court Chairman Kote Kublashvili must be dismissed because he was the reason for many law violations during the previous government.