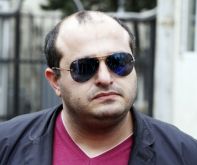 TBILISI, DFWatch–The Prosecutor’s Office in Georgia has questioned three of former President Mikheil Saakashvili’s security personnel as well as a former maid about a ‘top secret’ matter, refusing to give any details.

Also called for questioning was Gavaz Kuloiani, a woman who used to help Saakashvili’s wife, Sandra Roelofs, with housekeeping.

Lawyers working for those who were questioned didn’t offer any details either.

After leaving the Prosecutor’s Office, Janashia said they were questioned concerning a period when he used to worked at the protection service. His lawyer said Janashia fully answered all questions from prosecutors.

Lapachishvili said he doesn’t rule out that he will be summoned for questioning again.

“I have learned that Temur Janashia, former head of our protection service and now my assistant, was stopped at the border and wasn’t allowed out of the country. He should have helped me here with some things,” he said, adding that the others were also detained and weren’t allowed to go to Kiev.

He said those who were questioned also used to work as security staff for former president Eduard Shevardnadze and have served the country, not one particular president.

“Everything has a limit. There are some rules right? All these become ugly and meaningless harming Georgia’s reputation,” Saakashvili added.