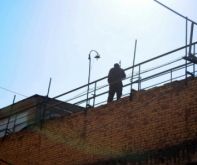 Gigi Ugulava was first brought to the scandalous prison number eight in Gldani, Tbilisi. This is where most of the prisoner abuse took place during Saakashvili’s presidency and where a series of big rallies were held after a handful of abuse videos were shown on TV in September, 2012, two weeks before the parliamentary election.

Representatives of the Public Defender’s office said after visiting Ugulava at Gldani prison that he was being held alone in quarantine in a part of the prison. Ugulava told them prisoners made noise when the prison employees wanted to bring him into an ordinary cell and he was taken back to a solitary place.

Ugulava, who is campaign chief for the National Movement in the local election, also told the ombudsman office that he refused to eat and requested to be brought to Matrosov Prison, as he wasn’t feeling safe in Gldani.

On Sunday, he was taken to prison no 9, known as Matrosov Prison, where former Interior Minister Vano Merabishvili and former Defense Minister Bacho Akhalaia are also held.

Gigi Ugulava is charged in several different cases, including money laundering, abuse of power and for being connected to an instance of election fraud.