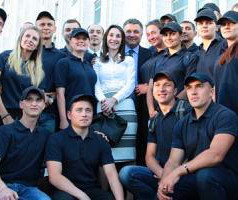 Eka Zghuladze is one of several former Georgian government officials who served under President Mikheil Saakashvili, and have found purpose in the Kiev government.

On Saturday, she stood next to Ukraine’s Interior Minister Arsen Avakov and presented the new head of Kiev’s police, major Alexander Fatsevich.

More than 1,900 new policemen were gathered in the center of Kiev for the ceremony.

“This is the first time you are all together right now. In 1916, a new patrol police of Kiev, beautiful, young and motivated. I represented you guys patrol leadership. Chief, head of department, 80 company commanders patrol,” Avakov wrote on his Facebook page.

“The guys have full responsibility, and at the same time are surprisingly optimistic! Last night we were happy with Eka and the guys with the first completed phase of our work.”

Zghuladze was appointed deputy interior minister at the end of last year and is currently in charge of the police reform in Ukraine.

She is only one among a number of former government officials from Saakashvili’s presidency who have been appointed for office in Ukraine’s new government, including Saakashvili himself, who is now governor of Odessa.

The police reform is probably the most well known reform Saakashvili conducted in Georgia after the Rose Revolution, and the reform which has been most welcomed. To free the police system from corruption, employees on every level were fired and replaced by entirely new and trained staff. Although those who were fired later became a factor in the protests against Saakashvili.