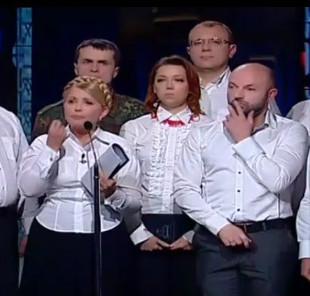 TBILISI, DFWatch–Right before Ukrainians went to the polls in Sunday’s parliamentary election, former Prime Minister Yulia Tymoshenko named a former Georgian economy minister as one of her advisers.

Tymoshenko is leader of Batkivshchyna (Fatherland), a small party which appears to have received more than 6 percent of votes and will enter parliament, according to preliminary results.

Giorgi Arveladze, the Georgian economy minister from 2006 to 2008, appeared next to her and other of her supporters on a TV show hosted by Savik Shuster.

Arveladze is a long-time ally of former Georgian president Mikheil Saakashvili and used to be one of the leading persons during his time in power.

He was entrusted to manage the TV company Imedi, which was taken away from opposition billionaire Badri Patarkatsishvili because the government was afraid of Imedi’s large viewer following and critical reporting.

Arveladze said his role as adviser to Tymoshenko is to prepare a package of reforms.

Tymoshenko named Arveladze as one of the Georgian reformers and said that the former Georgian minister will help prepare a program of transformations in Ukraine.

“Tens of Georgian intellectuals stand behind Giorgi Arveladze; those who prepared program of strong reforms in Ukraine,” she said.

Arveladze, whose wife is Ukrainian, graduated from the University of Kiev, alongside former Georgian President Saakashvili and current Ukrainian President Petro Poroshenko.

What Arveladze will probably be best remembered for is the so-called hoax news show which Imedi aired on March 13, 2010, which announced another Russian invasion. The news broadcast caused massive panic among Georgians and was named as one of the greatest hoaxes in history by Time Magazine.

Arveladze used to be close to President Saakashvili while the latter was justice minister in 2000-2001. He became MP for the National Movement after the Rose Revolution in 2003, then head of the president’s administration in 2005, until he was appointed as minister of economy in 2006.

In January 2008, Arveladze was entrusted to chair Imedi TV. After October 1, 2012, when an opposition coalition defeated the National Movement in the parliamentary election, he handed over Imedi to the family of Patarkatsishvili.

National Movement and its extravagant leader ex-President Saakashvili were seen as active supporters of the ‘Euromaidan’ protests in Ukraine from the very first days. That’s why the ex-president of Ukraine Viktor Yanukovych announced Saakashvili as persona non grata.

UNM activists also participated in the protests that led to the violent overthrow of Yanukovich in February 2014. One UNM activist was killed during one of the protest rallies.

After the regime change in Ukraine, Saakashvili was allowed to go there and has since visited Kiev often.

He and his party are seen as close to the Western-oriented leaders currently in power in Kiev. Saakashvili is a fellow student of Poroshenko’s.

Saakashvili offered the new Ukrainian leaders his party fellows as advisers. Soon after the toppling of Yanukovich in February, former Georgian Economy Minister Kakha Bendukidze was invited to join a group of advisers in Ukraine called the National Council of Reforms.

MP Giorgi Vashadze, from the National Movement and former deputy justice minister was invited to become advisers in justice reforms and construction of houses of justice, a kind of public service centers there have been built many of in Georgia.