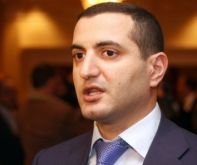 TBILISI, DFWatch–Former Defense Minister Davit Kezerashvili, who was detained recently in France, has been placed in 40-day detention until his extradition request has been processed.

According to French press, Kezerashvili was planning to travel to Albania from Nice airport, when border police stopped him to check his documents.

Le Monde writes that Kezerashvili was detained October 14 between Nice and Monaco.

Thea Tsulukiani, Minister of Justice, on Wednesday told journalists that if the extraditing request is not processed within 40 days, Georgia will request to have his detention prolonged.

“During these 40 days, the government must present material about the criminal case which is launched here,” she said, adding that there are two cases about money laundering and corruption.

Davit Kezerashvili used to be head of the financial police at the Finance Ministry and later became defense minister until leaving in 2008 after the Russia-Georgia war. The new government charged him with abuse of powers while being on the post. https://dfwatch.net/former-georgian-defense-minister-detained-in-france-12502