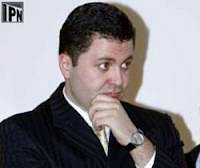 TBILISI, DFWatch–A former Georgian counterintelligence chief who is currently wanted was today convicted in absentia for abuse of power.

Data Akhalaia, whose whereabouts are unknown, was head of the Constitutional Security Department (CSD). He was on trial for beating two policemen, deprivation of life and liberty.

Both he and his deputy are wanted by Interpol.

Today, Akhalaia was found guilty, but only in the charge about abuse of power. He and three employees of CSD and the Interior Ministry severely beat two policemen on January 5, 2005, accusing them of verbally abuse of Tako Salakaia, wife of Vano Merabishvili, the former interior minister.

Only Melnikov was found and arrested in Kiev, Ukraine, on December 8. The others are wanted.

Data Akhalaia is brother of Bacho Akhalaia, another former Saakashvili official who is in prison awaiting the completion of a series of trials.