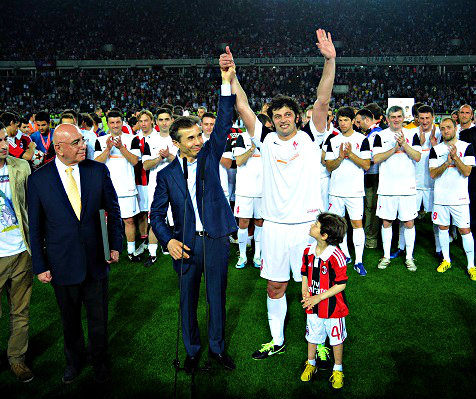 Kaladze, who is Energy Minister now, played for Milan against his friends, a team which was mainly filled by well-known Georgian football players.

The match was held on Dinamo Arena in Tbilisi Friday evening. The stadium was full. The evening started with a short ten-minute documentary about Kaladze’s football career, after which Bera Ivanishvili, Prime Minister Bidzina Ivanishvili’s rapper son, performed a few songs.

Giorgi Demetradze, who played for Kaladze’s friends’ team, scored the first goal after a penalty kick, and the first half of the match ended 1-0.

The national dance ensemble Erisioni held another performance. Afterwards, a small flash-mob was organized, when men only wearing underwear ran onto the stadium and suddenly starting to dance, and were joined by the dancers.

Filippo Inzaghi of Milan scored a goal in the second half on a penalty kick. Andriy Shevchenko and Pietro Vierchowod scored the next two goals and the match finished 1-3.

People applauded for Kakhi Kaladze for several minutes, and he was congratulated by AC Milan vice-president Adriano Galliani and Prime Minister Ivanishvili.

“It is a sad day. I’m leaving football, but am really proud. I want to thank everyone. I once again saw today how the Georgian people love me,” Kaladze said after the match.

Kaladze left football at the end of 2011 to support Ivanishvili in politics.