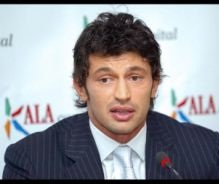 Kakhi Kaladze fined 10 million USD by Saakashvili's "nanny state". Lawyers say there is no law in Georgia which makes it illegal to withdraw money from a bank account without explaining to authorities what it is going to be spent on. (IPN.)

TBILISI, DFWatch – A well-known football player who left his career to join the opposition Georgian Dream coalition was on Friday fined 17 million lari for not doing as he was told by the State Audit Office.

Kakhi Kaladze’s property was also seized, but he doesn’t plan to pay the fine and is going to appeal Tbilisi City Court’s decision.

The case is built around a claim by the Financial Monitoring Service of the State Audit Office that Kakhi Kaladze and Bidzina Ivanishvili withdrew large amounts of money from their own bank accounts without indicating the purpose, which it is argued, is illegal.

Defense lawyers say there is no law prohibiting the withdrawal of money from one’s own bank accounts. Georgian Young Lawyers Association (GYLA) says the Financial Monitoring Office has no legal basis for requiring people to return money to their bank accounts.

GYLA’s lawyers considers such a request very strange, and points out that in none of the statements from the audit office regarding this case is there a reference to any law which the request could be based on.

“This is easy to explain, because there is no such regulation. So even if these persons do not fulfill this request and don’t return the money, there should be no responsibility for Kaladze and Bidzina Ivanishvili,” Tatuli Todua, lawyer at GYLA says.

The lawyer explains that a person doesn’t have any obligation to indicate what he or she spent money on and why.

“Property right means that a person can freely use his or her own money resources, withdraw money from bank accounts at any time, and a person has no obligation to indicate why he or she needs this money.”

In addition Kakhi Kaladze’s property was seized, because he didn’t do as he was ordered to by the audit office and hasn’t returned the money to his account.

His property is the following: The companies Max Bet, Kala Capital, residential buildings and cars. Kaladze has to pay the fine within seven days.

His lawyer Shalva Tadumadze says that judge Koba Gotsiridze had already made a decision to fine and seize Kaladze’s property before the trial began.

“The judge only read the serious part of the 30-page decision, which reveals that the decision was made before the trial,” he says.

Tadumadze explains that the representatives of the audit office didn’t present any evidence at the trial which would prove that Kaladze donated money to the bank account of Georgian Dream.

The former football player doesn’t plan to pay the fine as he considers it illegal.

In an interview with Maestro TV he said that most of the money that was withdrawn from his account was withdrawn by his father Karlo Kaladze and was spent on family business and had no connection to politics. Kaladze adds this was about 7 million lari, from which he withdrew about 300 000.

He says the form of his sentence is insulting, as it accuses him of money laundering.