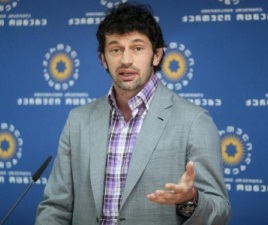 Kakhi Kaladze says what is happening to him is political persecution. Georgia's chief prosecutor has frozen his bank accounts in connection with an investigation about money laundering. (IPN.)

TBILISI, DFWatch – The former footballer, now opposition campaigner Kakhi Kaladze has been deprived of the right to appeal the seizure of his bank accounts.

This news was relayed by Shalva Tadumadze, a lawyer for the former AC Milan player.

Tbilisi City Court seized Kaladze’s bank accounts on July 26 after a motion by the chief prosecutor; one of many opposition related cases, all of which have gone in the prosecutor’s favor.

The prosecutor’s office published a statement claiming that there is reason to suspect Kaladze of money laundering, because he received an incoming money transfer of USD 6 million, some of which was cashed out later.

The prosecutor argues that whereas the popular footballer has withdrawn USD 1.6 million from his accounts in the monitoring period, only 900 000 of it appears to have been spent on household needs, and the remaining 700 000 dollars worth of cash is such a high amount of unexplained expenses that they were simply forced to freeze his bank accounts and launch an investigation against him.

The statement makes it clear that doing so only means following Georgian law and international standards in combating money laundering.

Kakhi Kaladze appealed the ruling the next day, and initially was told that he would not get an oral hearing, but would receive an answer within the prescribed 48 hour window.

The lawyer claims that Nikoloz Margvelashvili is exceeding his authority by denying the footballer an appeal hearing.

Kakhi Kaladze retired as a football player in December 2011 in order to support the election campaign of billionaire Bidzina Ivanishvili, who is challenging President Mikheil Saakashvili in the parliamentary election, expected to be held in early October.