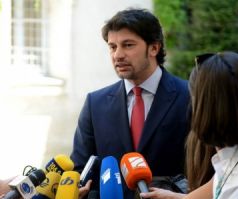 TBILISI, DFWatch–A government spokesperson in Georgia defended himself Sunday against criticism from an opposition politician for standing in front of a political banner during a press conference on election day.

Energy Minister and Vice Prime Minister Kakhi Kaladze had a Georgian Dream banner in the background as he held a press conference at the coalition headquarters today.

Nino Burjanadze, leader of United Opposition, criticized him for this, and said it was a violation of election regulations.

But Kaladze denied that he has violated the law by holding a press conference with a coalition banner in the background. Soon after, Burjanadze responded a second time, saying that there is such a prohibition and she advised Kaladze ‘not to teach politician to be a politician.’

“I want to tell football player Kaladze that there were many good football players in the team of Italy, even better than him, but none of them attempted to teach a politician how to be a minister or vice prime minister,” she said, adding that Georgian Dream violates election legislation.

Zurab Jibghashvili, an expert on the constitution and election legislation, says the ruling coalition didn’t violate the law, which has a prohibition on TV commercials during election day.

“Placing a banner at party office, which may later be visible on TV, is not directly considered a commercial,” he explained.

The former ruling party, the National Movement, meanwhile has portrayed today’s election as marred by violence and fraud. An image was circulated in social media allegedly showing five hundred envelopes found at a precinct in Zugdidi.

One of the party’s spokespersons, MP Giorgi Kandelaki, said the governing coalition is using ‘carousel voting’, which means that the same group of people are brought into different precincts allowing them to vote several times.

Giga Bokeria, former Secretary of the Security Council, claims that a group of people were ordered to attack certain precincts.

As an example, he pointed to an incident in Zugdidi in the morning, where masked people stole ballot-papers, and another incident in Anaklia nearby, where the while family of a man who has been missing for two years attacked a precinct as a form of protest against the absence of an effective investigation of their missing relative.