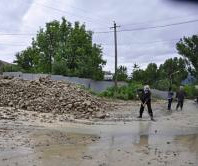 The E60 was closed due to flood a second time near Kutaisi. (Interpressnews.)

TBILISI, DFWatch–A section of the E60, the Tbilisi-Senaki-Leselidze road in western Georgia, was damaged again on Sunday due to flooding.

This is the second time flooding has damaged the road. After flooding hit a few days ago, repair work allowed the road to be reopened on Saturday, only to be hit by another flood.

The damaged section as at the 206th kilometer of the road. According to the Road Department, there is an alternative route that drivers may take, which goes through Zestaponi, Baghdati and Kutaisi, but on this road trailers and semi-trailers are prohibited.