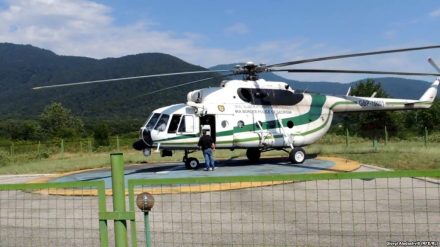 TBILISI, DFWatch–Five people were injured as a helicopter crash landed in eastern Georgia on Thursday.

Three pilots, a border guard and a police officer were injured as the helicopter belonging to the Border Police had a hard touchdown near the village of Artana in Kakheti.

The accident occurred in the vicinity of Border Police outpost in Andarazar near the state border with Dagestan, a constituent republic of the Russian Federation.

Only five persons were on board helicopter, which, according to the Ministry of Internal Affairs of Georgia, was on a routine flight.

All injured were brought to Telavi hospital.