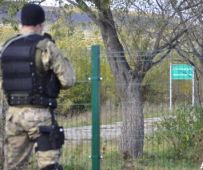 Five out of eighteen Georgians detained in South Ossetia were released on Saturday. (Interpressnews.)

18 Georgians have been detained by Russian soldiers in the last two weeks in villages on the disputed border.

According to the five Georgians who were released on Saturday, they had to pay 100 lari (USD 60) before being released. They were fined for illegally crossing the border.

Irakli Zabakhidze, one of the released, told journalists that there was no psychological or physical pressure. He said all five of them were in the same cell. He also said he paid cash before being released. The family sent him 100 lari.

13 Georgians remain in detention in Tskhinvali.

Dozens of Georgians are detained per month at the unrecognized border, and are sent to Tskhinvali, the administrative center of the breakaway region. The issue of detainees is a regular topic at the meetings of the EU-hosted Incident Response and Prevention Mechanism, which will meet again on June 3.