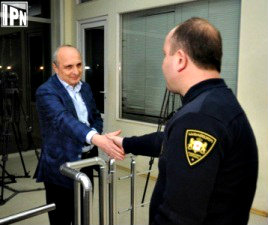 Meanwhile their supporters and other UNM members are gathered outside the Kutaisi prison where Merabishvili is kept, while another rally is held outside the City Court, where former political prisoners are demanding to jail the former interior minister.

Some are holding posters with photos from May 26, 2011, when an anti-government demonstration was violently dispersed by the government, and November 7, 2007, when the same thing happened, as well as brooms, which is a symbol for the prison abuse scandal of 2012.

Merabishvili was detained on Tuesday and charged in three different cases, including the May 26 events the and Sandro Girgvliani murder case.

The detainee himself has according to his lawyers said that he thinks the charges are ridiculous. The Prosecutor’s Office will ask the court to place both Chiaberashivli and Merabishvili in pretrial detention, while their lawyers will ask for no restrictive measures, neither bail nor detention, considering that both of them are cooperating with the investigation and there are no grounds to detain them.

Merabishvili’s lawyer Gogita Gabaidze says that the police has searched his client’s house and took with them “computers, money and memory cards”.

Gabaidze claims that the 54 000 euros the police allegedly took belongs to the mother of his client’s wife, and was kept there after his wife sold her house. The lawyer noted that he will provide documentation about the money soon.

The lawyer says Chiaberashvili’s house was also searched and that “computers and some documents” were removed.

Yesterday, President Mikheil Saakashvili, who is also leader of the UNM party, said that he appeals to the government and Prime Minister Bidzina Ivanishvili ‘to think of the results of their actions.’

He said that there is a danger that Georgia may become ‘an ordinary authoritarian regime in the region, which will set the country back many years, in terms of domestic and foreign policy.’

The court hearing will be held at 17:00 on Wednesday.