Fight between inmates in Gardabani prison

Fight between inmates in Gardabani prison 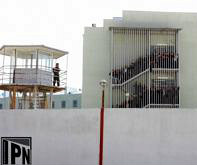 TBILISI, DFWatch–Two prisoners clashed at Prison No 6 in Gardabani on Friday.

The fight took place at 01:00 at night. Relatives and family were gathered at the prison, and some of them told journalists that law enforcement entered the prison, but the Prison Ministry says only regular police was called.

Interpressnews quotes Tea Pertia, Deputy Head of the administrative department of the ministry, saying that one of the prisoner was more aggressive and was taken to prison No 7.

Other prisoners shouted messages of support to him as he was brought out. No special unit representatives were called to the prison, she said, adding that there was no tension or attempted riot in the prison. Such reports were false, she said.

Police came in order to control the situation outside the prison, but weren’t allowed to go inside.

Pertia said she doesn’t know how the prisoners managed to contact their family as they aren’t allowed to use mobilest phones in jail.