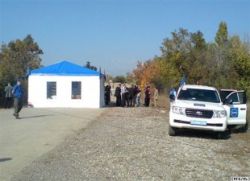 For a second time, a field meeting across borderlines in the conflict region Abkhazia has broken down before it started. (IPN.)

TBILISI, DFWatch – Again, a field meeting meant to defuse tension in the conflict region Abkhazia has broken down before it even started.

The meeting should have been held June 27, and was to have brought together operative leaders from the warring parties of 2008 within the Incident Prevention and Response Mechanism (IPRM).

There are different versions as to why the meeting didn’t take place, with Russia and Georgia blaming each other for the failure.

This meeting was an initiative of Antti Turunen, UN Special Representative at the Geneva talks, and it should have been held in Gali, a small town in southern Abkhazia with predominantly Georgian population. Representatives of Abkhazia, Georgia, EU, UN and Russia should have attended the meeting.

The Russian Foreign Ministry website published a statement saying that Georgia ‘under a pretext’ refused to attend the meeting in the town of Gali, despite the fact that the location has never presented any difficulties before.

“The refusal by the Georgian side to support the constructive initiative the UN unequivocally confirms the real intentions of the Georgian leadership, for which considerations of false prestige is above the interests of security on their own borders,” the statement says.

Georgia’s Deputy Foreign Minister Nino Kalandadze today responded by saying that the meeting was not well enough planned, that had only gotten as far as to the planning stage.

“As for the real reason, you know the Russian government deliberately contributed to make this meeting fail and this was done by appropriate representatives from Russia in Abkhazia. We have a desire to retain this mechanism. The resistance came from Russian Federation and we hope we will be able to renew it.”

IPRM meetings are held regularly after the Russo-Georgian war in 2008. The meetings are used to clear up misunderstandings and discuss prisoner exchange, illegal border crossings and other problems.

This is the second time an IPRM meeting in Abkhazia breaks down at the planning stage. The first time was in April, as the Abkhazian party declared the head of the EU observers a ‘persona non grata’.

The same kind of meetings are held in South Ossetia.