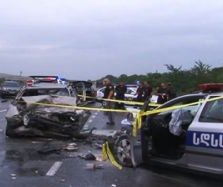 Witnesses say one of the cars escorting President Saakashvili was involved, but the government says it was a car belonging to the special state protection service, which has a more general role, but also works with protecting the president. (IPN.)

TBILISI, DFWatch – Witnesses say one of President Saakashvili’s escort cars was involved in a car accident on the highway near Gori, which left a driver of another car dead and four others injured.

Witnesses say one of the president’s escort cars crashed into a civilian car.

But the interior ministry and the state guard service deny this version of events. According to them, the other car violated road traffic rules and crashed into the president’s escort car.

The government later also denied that the other car belonged to the president’s escort and said it was the property of the special state protection service (SSPS), a branch of the police with a more general role, but also providing security while the president is travelling.

Info9, which is an online television reporting from the regions, yesterday evening first reported that people witnessed how the president’s escort car crashed into an Opel Astra which was moving in the opposite direction. The driver of the Opel died. There were four people in his car, including a 9 year and a 2 year old. All were taken to the hospital, along with the other four people in the second car.

In the evening, the interior ministry released a statement regarding the case, which said that an investigation had been launched.

SSPS also responded nearly with the same text, only adding that the health condition of one of the service employees is critical.