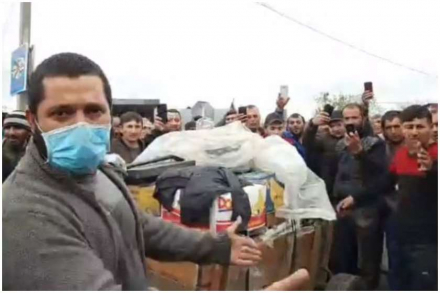 Dozens of farmers took to the streets in Marneuli municipality Wednesday protesting strict quarantine regime and appealing to the authorities for assistance.

Farmers, mostly ethnic Azerbaijani from nearby settlements, assembled at Shulaveri, a village five km south from Marneuli, an administrative center in Kvemo Kartli region, and blocked traffic on a road leading to Georgian-Armenian border.

They protest harsh quarantine measures that render them unable to sell agricultural products thus “dooming them to hunger”, as one of the farmers put it.

Kvemo Kartli governor and other officials promised the farmers assistance in distributing their product to markets and eventually the rally dissolved.

The authorities claim the protest was provoked by opposition, namely European Georgia and United National Movement, which was soon rebutted by opposition politicians.

Speaking to Radio Marneuli Ahmed Imamquliev, a member of the Marneuli City Council representing European Georgia, said that his political party had nothing to do with the rally, and he himself heard about it live on radio.

The government imposed quarantine on entire territory of Marneuli and neighboring Bolnisi municipalities on March 23 fearing the spread of novel coronavirus. Traffic to and out of the district has been blocked by police and military. The municipality with its predominantly ethnic Azerbaijani population is major producer of agricultural goods and relies heavily on its sales.