Farmers in Georgia dump mandarin harvest due to delay

Farmers in Georgia dump mandarin harvest due to delay 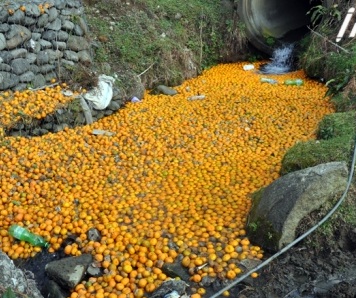 Farmers in Kobuleti have thrown away mandarins that rotted while they were waiting to bring it to the factory. (Interpressnews.)

TBILISI, DFWatch–Farmers in Kobuleti, a small town on the Black Sea coast, have thrown away part of their mandarin harvest because it rotted before they managed to sell it to the factory.

The farmers say frost destroyed their mandarin and they just have to throw it away now.

One of them, Guram Shakirashvili, who lives in Khala, told Interpressnews that the biggest problem is that he couldn’t sell the mandarin in time. He only managed to sell six tons of mandarin out of 10 tons of harvest.

He said he sold the mandarin without sales documents, which means that now he won’t be able to get the 15 tetris per kilo of state subsidy and no-one will pay compensation for the four tons he lost.

Shakirashvili had to sell his mandarins to so-called mediators; vendors who do not register the sale. The sales price was 50 tetris (USD 0.26) per kilo.

Farmers say the roads were blocked for several days due to heavy snow and they didn’t make it to the plant in time to sell their mandarins.

Avtandil Meskhidze, the economy minister of the Adjara region, told journalists that all the good quality mandarins have been sold.

“If someone harvested frozen mandarin after snow and then threw it away it is their decision,” he said, adding that a government commission is monitoring the subsidy procedure in every local municipality.

He said those who trade in mandarins don’t have any interest in not issuing sales documents, so farmers should get such documents without any problems.