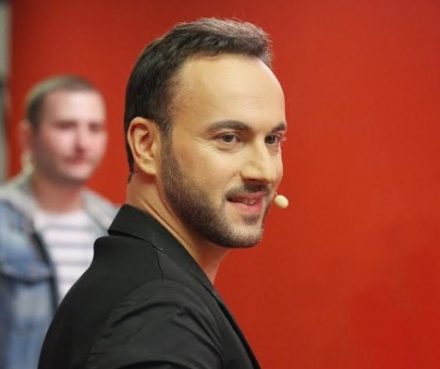 TBILISI, DFWatch–Six men were detained after a group of nationalists assaulted reporters working for the opposition leaning TV channel Rustavi 2 in Tbilisi on Monday. At least one journalist was injured.

The TV channel’s sports reporter Davit Eradze was hospitalized after members of the group Georgian March beat him in the face.

Several other journalists were also injured during the assault, which took place on the parking lot of the Rustavi 2 building in Tbilisi, according to its director Nika Gvaramia.

The target of the assault appears to have been TV anchor Giorgi Gabunia, because of a statement he made in the weekly news program P.S. which was seen as insulting to the feelings of Christians. The Georgian March demanded a public apology from him.

Gabunia’s offending comment on P.S. Sunday referred to former PM Bidzina Ivanishvili’s penchant for buying large trees, uprooting them and replanting them on his property.

“I think Jesus Christ made a big mistake when he came to preach in Israel [2,000 years ago]. If he had come to Adjara in 2-3 years, no one could have crucified him, because no single tree would have been left in the region to make the cross,” Gabunia said.

The Georgian March activists gathered outside the Rustavi 2 building on Monday afternoon, looking for Gabunia. When the latter appeared in a car together with Rustavi 2 lawyer Tamta Muradashvili, the protesters surrounded the car and blocked it for about half an hour. The two locked themselves inside the car while the radicals started punching it and swearing at them.

Other Rustavi 2 journalists and staff arrived and attempted to free Gabunia and Muradashvili, and that was when the physical confrontation occurred.

Later, Nika Gvaramia said that Rustavi 2 ethical board had reprimanded Gabunia for insulting the personal feelings of Christians.

He demanded that authorities must offer protection, and said that the TV channel is under attack by forces ‘directed and financed from Russia’ and called upon law enforcing agencies to launch criminal charges against the attackers.