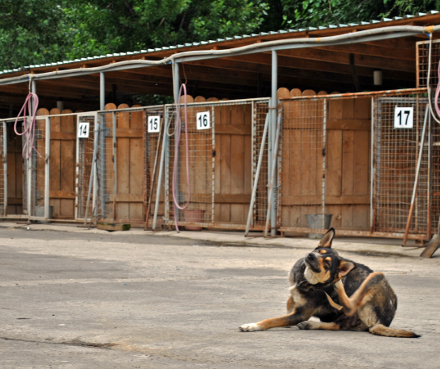 TBILISI, DFWatch–Fighting broke out Tuesday at Tbilisi City Council over a proposal to shut down a large private dog shelter in the capital.

Neighbors of the shelter showed up at the council session to demand that it be shut down because they consider it a nuisance.

In parallel with the discussion in the council there was a gathering outside the council where people, most of whom had brought their dogs, were demanding not to shut down the shelter, while inside the session hall there was a confrontation between council members, Elizbarashvili and his son, animal rights groups, locals living nearby the shelter and others.

The commotion took place during a debate in the City Council’s commission for environmental protection. Residents said they are disturbed by barking dogs and bad smell in the neighborhood. During the discussion, Elizbarashvili’s son and Tariel Chanturia, a resident from the neighborhood, began beating each other.

A lawyer for the residents who are against the shelter says if the council decides not to close the shelter they will go to court.

But supporters of it are also on the offensive. An online petition to save the shelter gathered hundreds of signatures in just a few hours. It says that many people have learned about the shelter over the years and lots of lost animals have been returned to their owners or found new homes.

The plight of Tbilisi’s stray dogs has caught the attention of French actress Brigitte Bardot, who provided financial support for a spay program run by the Georgian Society for the Protection and Safety of Animals.

There are several independent organizations running dog shelters in different parts of the capital. Animal rights activists say the most of them don’t have enough financing and can’t take properly care of the animals on the donations they receive.

A new facility was opened by Tbilisi City Hall in the beginning of 2012 and has become a shelter for homeless dogs and other animals. The place offers medical assistance and other procedures, including inoculation and sterilization. The city’s shelter has capacity to hold 350 animals. Some of the animals are sterilized, castrated and marked with a number, then returned to where they were found.

Tamaz Elizbarashvili’s shelter was launched in 2004. It also holds a few bears, which has been agreed with the Environment Ministry. According to the staff at the shelter, none of the animals kept there are allowed outside without attendance. When outside, staff will be walking with the dogs. They also say the shelter is cleaned day and night.

After leaving the council session, Elizbarashvili said what happened was a provocation and he didn’t wish to comment to journalists.

“I won’t close this facility. This is a very good job and it doesn’t disturb anyone,” he said during the discussion, adding that he will fight till the end to protect it.

The discussion lasted for two hours and ended with shouting and fist fighting. In the end it was decided to set up a working group to solve the issue.