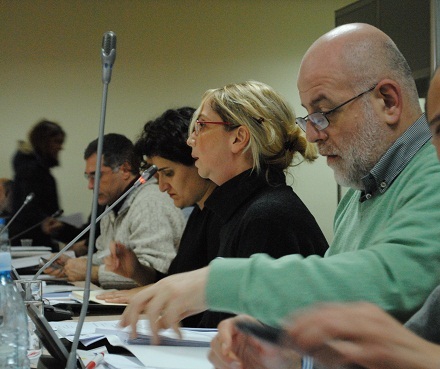 Zviad Koridze (right) and Lasha Tughushi (left), here seen earlier in 2012, were among the media experts who proposed a bill with legislative changes to improve media freedom. (DFWatch photo.)

TBILISI, DFWatch — A handful of media experts are calling for legislative reforms to address problems with media freedom in Georgia, and have prepared a draft bill as a first step.

The bill would amend the law on broadcasting, and was presented by its authors Lasha Tughushi, Zviad Koridze and Tamar Kordzaia at a meeting organized by UNDP in Tbilisi.

According to the draft, amendments are needed in two directions. The first is a guarantee of financial transparency, the other is to provide so-called must-carry and must-offer principles by law.

Media experts, TV, NGO and international community representatives attended the meeting to discuss freedom of media in Georgia. Freedom of the media is important for the development of the country, participants at the meeting agreed. Things have been done in this regards, but still there are problems and the next steps have to be prepared.

After a long struggle by the non-governmental sector and the international community, the previous government agreed to establish the principles of must-carry and must-offer two months before the parliamentary election, but on the condition that the regulation would only be in force until Election Day. Afterwards, it would be dependent on what broadcasting companies and network operators would decide.

This is the reason the media experts think there is a need to regulate this by law. According to their draft bill, the transmission of a broadcast signal will be free, but if it wants to, a broadcaster and a cable operator company may agree on payment for transmitting the signal. But if there is to be a charge for transmitting, the price must be equal for all companies.

The other area covered by the bill is financial transparency. The national TV channels should conduct an annual audit in accordance with international standards. The National Communications Commission should define a company, which will conduct an audit and the conclusion will be published in full by the GNCC and by the national channels.

Owners and those who want to have a broadcast license must publish a declaration of property so people can know how much money the owners of a TV company have.