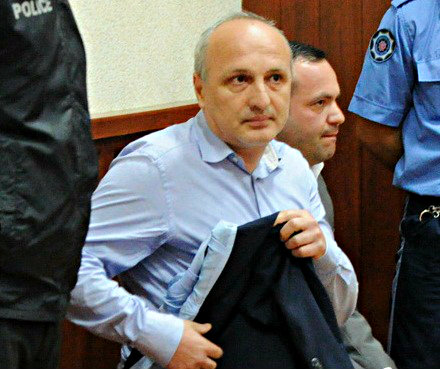 Former Minister of Internal Affairs Vano Merabishvili is held personally responsible for the violent dispersal of demonstrators two years ago which led to at least two deaths and was accompanied by a nationwide crackdown on opposition groups. (Interpressnews.)

The violent dispersal of peaceful anti-government protesters by police and regime loyal vigilantes two years ago resulted in at least two deaths and many injured.

Prosecutor Lasha Tkeshelasvhili said Tuesday that Merabishvili is charged with abuse of powers in May 2011 while he was minister of internal affairs. The new charges carry a penalty of from five to eight years in jail.

According to the prosecutor, he didn’t order the dispersal of a rally that day two years ago, but ‘a large-scale and indiscriminate’ attack on people with different political views.

“Its clear goal was to massively arrest people, threaten them, and to physically and psychologically influence them.”

The operation on May 26, 2011, started at about 00:10 and saw police and vigilantes encircling demonstrators without proper warning.

In a statement, the Prosecutor’s Office emphasizes that the operation was initiated on the personal orders of Vano Merabishvili and that demonstrators were not given reasonable time to get away and avoid being encircled.

“After deployment of water-cannons, demonstrators tried to run away, but in accordance with the plan they were purposefully not allowed to securely leave the area and follow the instructions of the police,” the prosecutor’s statement says. “Besieged peaceful citizens were attacked with rubber bullets and batons from different sides by groups of armed police in the streets and buildings using unjustified unreasonable and excessive force on purpose.”

The operation resulted in two deaths instantly and about 300 persons were injured, while tens of people were unreasonably detained. The full extent of casualties is unknown, with two more dead bodies found on a roof the next day that allegedly had been electrocuted under peculiar circumstances. One further death is by some attributed to the May 26 violence, making a total of five potentially.

The police action was criticized for having encircled demonstrators and used excessive force with no apparent way for them to comply with the order to disperse, thereby becoming target of violent beating by the regime’s three thousand strong force, which in addition to police included a band of Saakashvili-loyal vigilantes which had been seen at previous demonstrations.

Merabishvili was detained last week together with Zurab Chiaberashvili, governor of Kakheti region, both charged with embezzlement of state money in connection with an employment program used as a cover for election campaigning in 2012.

The United National Movement’s members of parliament have taken leave in order to organize rallies in several parts of the country against the imprisonment of their party secretary.