Demonstration outside Russian “embassy” in Tbilisi

Demonstration outside Russian “embassy” in Tbilisi 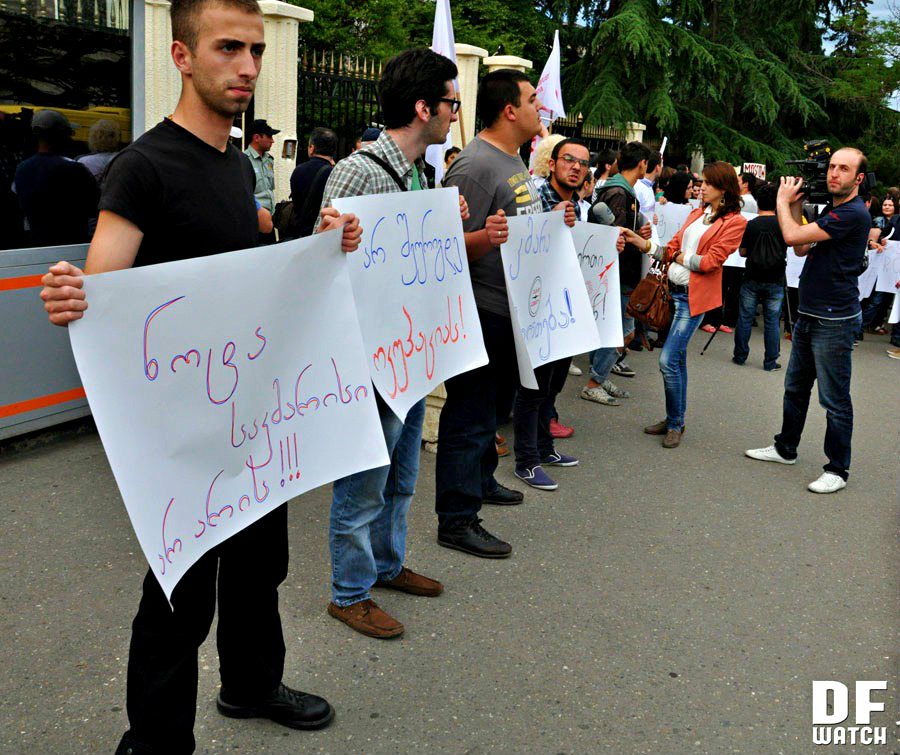 TBILISI, DFWatch–A rally was held outside the former Russian embassy in Tbilisi on Tuesday to protest against Russian soldiers moving the so-called administrative border 300 meters into Georgian controlled territory on Monday.

Members of non-government organizations, students and others gathered Tuesday evening holding posters reading ‘No to occupation,’ ‘stop Russia’, ‘EUMM do something’, and ‘only note is not enough.’

One of the participants told DF Watch that the government should do more to respond to the recent actions by Russian soldiers, because it is not about how many meters the border is moved, but that they shouldn’t do such actions.

The participants of the rally underlined that it was not a political rally and that people came to protest against the actions of the ‘occupying power’.

“For the government to express concern is not enough,’ they said.

Those gathered agreed to write an appeal to international organizations and inform them about recent events in the conflict zone.

Foreign Affairs Minister Maia Panjikidze said she discussed this issue with EU’s representative in Georgia Philip Dimitrov, and that Georgia has already sent a note of protest to the Russian Federation through the Swiss embassy.

She said that a report will be presented on Wednesday in Strasbourg, and Deputy Interior Minister Davit Zalkaliani will explain the problems people are having along the so-called administrative border, but not Monday’s event itself, as the report was prepared earlier and recent events will be discussed in the next report for fall of 2013.

“But we expect a statement by the EU in Strasbourg,” she said, adding that the government has video footage of what happened at the so-called administrative border and it will be sent to all embassies in order to inform the international community.