Ex-MP arrested for coup attempt as crosses border to Georgia

Ex-MP arrested for coup attempt as crosses border to Georgia 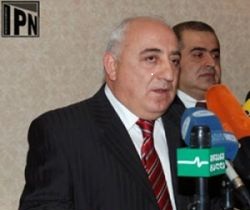 Valeri Gelbakhiani, who was convicted in absentia in 2008 for attempted coup d'état, came back to see his mother, who lies seriously ill in a regional hospital in Georgia. (Photo: Interpressnews.)

TBILISI, DFWatch – A former parliamentarian has been arrested in Georgia today just as he entered the country from Armenia.

Valeri Gelbakhiani had just crossed the border as law-enforcers arrested him. He voluntarily surrendered and was transferred to Gldani prison No 8, according to his son, who was travelling with him, quoted by Interpressnews.

A court must confirm his detention within 24 hours.

The former member of parliament is convicted of planning a coup d’état in 2007 together with Badri Patarkatsishvili, a now deceased billionaire who owned a TV station and supported an opposition uprising during a period of major unrest in the country.

Gelbakhiani left Georgia in the wake of the trouble, but came back today with his son to visit his mother, who lies ill in a hospital. Gelbakhiani is currently being held by the Special Operative Department (SOD) of the Interior Ministry. His son’s current whereabouts are not known, but there are no charges against him.

The Interior Ministry says that on January 22 2008 Valeri Gelbakhiani was charged with attempting a coup d’état.

According to the Georgian government, Gelbakhiani was planning to overthrow the government at the end of 2007 through a conspiracy together with billionaire Arkadi (“Badri”) Patarkatsishvili.

The government has published secret recordings where the two are discussing the planned coup.

“According to the action plan, allegedly dissatisfied people would be brought onto the streets and there would begin mass unrest by organized groups on the whole territory of the country, with an aim to disrupt the elections by the provocations. Meanwhile, Interior Ministry employees would be won over through offering a big amount of money, arresting the interior minister; which would be followed by disturbance of the functioning of other governmental circles,” information published on the Interior Ministry webpage says.

Gelbakhiani was convicted in absentia in 2008 and has since been a wanted person.

Giorgi Targamadze, leader of the Christian Democrats Movement and Gelbakhiani’s former political ally, today held a press conference regarding the arrest. He said that Gelbakhiani decided to return to Georgia to visit his seriously ill mother, who is in Sachkhere hospital.

Targamadze says he has still been unable to contact Gelbakhiani’s son, Irakli, who crossed the border with his father. The police had no charges against him and he hasn’t been wanted.