Ex minister submits US Justice Department report in own defense

Ex minister submits US Justice Department report in own defense 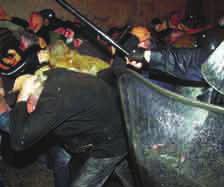 Police used excessive force on May 26, 2011, according to Georgian Young Lawyer’s Association.

TBILISI, DFWatch–The lawyer of the detained former prime minister Vano Merabishvili demands to stop the criminal prosecution against his client, or at least release him on bail, after the publication of a report commissioned by the US Justice Department.

The report, prepared by Densus Group, deals with the violent dispersal of an anti-government protest on May 26, 2011, when Vano Merabishvili was interior minister. But the Prosecutor’s Office claims that the report only confirms the guilt of Merabishvili and says the demands by his lawyer are unacceptable.

The non-governmental organization Free Zone, which was set up by supporters and members of the National Movement, on Monday published on its website a scanned version of the report by Densus Group. The document states that the report was prepared on the orders of the US Department of Justice and implemented by Densus Group, a US consultancy company.

According to the report, in order to block Rustaveli Avenue, protesters used metal barriers to link them with metal cables anchored to street furniture.

“This action can be interpreted as direct provocation to force police into direct action, as Rustaveli Avenue was to host the Independence Day Parade due the next day, May 26,” the report says.

It also says that the permit for the protest expired at midnight on may 25th and the police started to plan a dispersal operation to move the protest away from the avenue as soon as possible to allow for preparations for the May 26 parade.

“Previously police had offered protesters alternative protest venues in the capital as an alternative to Rustaveli Avenue. […] Before the actual dispersal police also gave specific legal notice of intention to disperse and had given additional verbal warnings to protesters to that effect,” it says.

Police moved from north using water cannon and ‘less lethal impact rounds’ to remove the barrier. About 200 protesters resisted out of 1000.

“There is also evidence of other missiles and Molotov cocktail missiles being available to the protesters and intelligence that there were some in the crowd carrying legally held firearms.”

“There is clear video evidence of excessive use of force by a very small number of officers and there is considerable concern as to the deployment and aggressive use of special munitions and CS agents in circumstances which from the reference material provided, did not justify or necessitate such action,” the report reads. “We must also recognize that the vast majority of officers deployed on the night of May 25/26 were well disciplined and acted at all times within their orders and used a proportionate and necessary amount of force to achieve their objectives.”

Vano Merabishvili from President Saakashvili’s National Movement party, was for many years interior minister, but was appointed prime minister three months before the parliamentary election in 2012, when he and also became secretary general of the party.

In May 2013, he was detained, even though at the time he was thought to be the presidential candidate of the UNM. The Prosecutor’s Office charged him in three different cases, out of which one concerns the dispersal on May 26, 2011.

There is evidence of special units using rubber bullets, batons and gas to disperse the rally. One policeman and one protester died on the day of the rally. The next day two corpses were discovered on the roof of shop close to Freedom Square. One further death is by some attributed to the May 26 dispersal.

Georgian Young Lawyer’s Association published a report which highlights the excessive use of force by the government’s forces. It says there were numerous instances of more than ten policemen beating one protester who was not putting up resistance. The firing of rubber bullets at short distances, aimed at the head, led to one protester losing his eyesight on one eye. According to GYLA, the dispersal operation was not in line with international standards.

Further questions have been raised by local journalists, who found, by studying photographic evidence, that the government’s forces also included vigilantes, apart from police.

In the aftermath of the dispersal, four Georgian journalists were accused of being Russian spies. One indicated that the charge was punishment for having documented the violence on May 26.

People searched for their relatives and family members for the whole night and for a few days, finally finding them at different detention facilities. The dispersal caused a massive reaction and drew attention from international organizations, diplomats and local human rights NGOs.

Merabishvili’s lawyer, Giorgi Chiviashvili, now demands that the criminal prosecution against his client is stopped in those charges relating to May 26, or at least release him on bail.

At a briefing Monday, the lawyer said that the Prosecutor’s Office has given him the above mentioned report, which was conducted on the orders of US Department of Justice. He also said that the Interior Ministry received this report in 2011.

“We just managed to get this report, which includes answers to every question about what happened on May 26, 2011,” he said, adding that he has submitted the report as evidence in the case against Merabishvili.

The same day, the Prosecutor’s Office responded with a statement saying that the Densus report only confirms that the charges against Merabishvili are ‘justified and legal’. The office also explains that the report cannot be admitted, as new evidence and different interpretation or legal manipulation is an attempt ‘to mislead society’.

“It must be considered that Densus mainly used false material and information provided by the Interior Ministry, when they worked on the report,” the statement reads.

As an example, it mentions a part of the report which says that four policemen were dismissed after studying the dispersal operation, one was reduced in rank and nine reprimanded; however the report doesn’t provide information about where those officers worked, why they were punished and exactly which articles they violated.

The statement by the Prosecutor’s Office says that the investigation revealed that ‘the Interior Ministry only pretended to punish 16 employees of the ministry in order to cover up illegal actions of the police and Vano Merabisvhili participated in this process.’ Part of those 16 employees weren’t even at the site of the rally that night and didn’t participate in the dispersal. Three of them had already been fired before the decree was issued about punishment.

In the evening, Georgian media reported about the response from Densus Group about the report.

“Densus group conducted and continues support of the US government and its partners, including government of Georgia,” reads the statement, which Interpressnews received on e-mail. “It has been the part of this support when Densus Group participated in the process of reviewing May 26, 2011 together with the Ministry of Interior. The ministry has results of this report and you can ask questions to the ministry.”