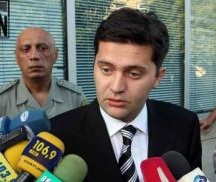 Bacho Akhalaia has returned to Georgia after going abroad after the October 1 2012 parliamentary election. "I am ready to answer every question regarding my activity," he writes on his Facebook page. (IPN.)

TBILISI, DFWatch — A former government official seen by many as the main architect of the torture in Georgia’s prisons says he has returned after leaving the country shortly after the parliamentary election.

“I’m responsible for each of my actions, each of my steps,” he writes. “Even though Georgian Dream representatives are making statements against me lately and their persecution won’t be free of politics, and even though I think their goal is to organize a political show instead of fulfilling numerous promises, I have returned to Georgia and state that in case of investigations conducted by appropriate bodies, I am ready to answer every question regarding my activity,” Akhalaia writes.

The interior minister claims he left the country only temporarily, as he didn’t want others to think he would interrupt the peaceful transfer of power.

Akhalaia speaks about successful reforms conducted in different spheres while he was in government. He underlines that he supports the policy of President Mikheil Saakashvili.

“Georgia is the country where I was born and grew up in, and I feel the biggest responsibility for the country and each of its citizen. Thanks to President Saakashvili, I was granted responsibility for participating in a lively, important, but painful reform. I wasn’t planning and [do not] plan to leave my country. No matter what I do in the future my main principle will be Georgia’s success, peace and the welfare of our citizens.”

Bacho Akhalaia is a member of a family claimed to be close to Mikheil Saakahsvili. Roland Akhalaia, father of Bacho Akhalaia, ruled Zugdidi, a region close to occupied territory, through unofficial channels. He competed with Irakli Alasania, current Defense Minister, in the parliamentary election and won.

Data Akhalaia used to work in different positions in law enforcement bodies, and was recently appointed as Deputy Defense Minister in the previous government. After the election he was also reported as having left the country.

Bacho Akhalaia is considered to be one a staunch Saakashvili loyalist. July 4, he was appointed as interior minister, but when the prison abuse scandal broke September 19, he resigned. Many prisoners and their parents accused him of being personally involved in a number of torture cases. He was also accused of being involved in a rebellion at Ortachala prison in Tbilisi on March 27, 2006.