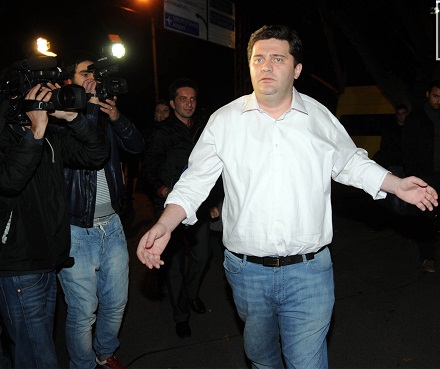 Former defense, prison and interior minister Bacho Akhalaia has been moved from Gldani prison to Prison number 7 in Ortachala, south in Tbilisi, known for holding members of the Georgian mafia. (IPN.)

A detained former government official has been moved from a prison scandalized by revelations of torture to another prison, which is known for holding so-called thieves in law.

Former interior minister Bacho Akhalaia is in detention awaiting trial for abuse of power, illegal deprivation of freedom and torture. He was first placed in Gldani prison north in Tbilisi, the place where most of the prison torture has taken place. Now, he has been moved to No 7 facility in Ortachala, south in the capital, according to a posting by his wife Ani Naddareishvili on Facebook.

The prison ministry says Akhalaia was moved in order to improve his safety. There are less prisoners at Prison No 7 and Bacho Akhalaia will have his own cell.

Currently, his family and other supporters are gathered outside Prison No 7.

His father says Bacho is the ‘personal’ prisoner of the current government and that his imprisonment is a form of vengeance. The government has done everything to portray his son as a torturer and a murderer, he told journalists.

Bacho Akhalaia, one of the core Saakashvili loyalists, served most of his time in government as prison minister and defense minister. Many torture cases and one riot has been attributed to him, but the current charges are not about the things which built his reputation, but a few incidents involving subordinates and soldiers while he was a defense minister.

A journalist with Interpressnews who is among a pool of observers allowed to enter prisons visited Bacho Akhalaia at No 7 prison, and reported that the he is the only detainee in that wing of the building.

Akhalaia says his rights were not violated at prison No 8, and moving him to No 7 is more like an act of cynicism rather than security.

“I have felt safe so far, but when you are in 20 meters from ‘thieves’ [mafia, ed.] it cannot be a safety guarantee for future,” he said, adding that he was moved yesterday evening without any explanations.

The monitoring group informs that there are 35 prisoners at Prison No 7, 20 of them are so-called thieves in law; post-Soviet mafia.