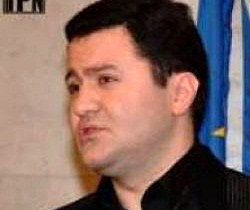 Data Akhalaia, the former head of the Constitutional Security Department (Kudi) during the Saakashvili regime, is brother of the imprisoned former defense minister Bacho Akhalaia, and son of the former regional prosecutor in Samegrelo, Roland Akhalaia, both of whom are facing their own charges as part of a broad-sweeping cleanup of top-level crimes.

Sentenced in absentia, Data had left Georgia shortly after it became clear that Saakashvili’s National Movement had lost power in October 2012 and the opposition would come into government, and thus ex-officials in the outgoing government who had transgressed in all likelihood would but held to account through the courts.

Bacho Akhalaia’s wife Ani Nadareishvili wrote on her Facebook page Wednesday that Data Akhalaia decided to apply for political asylum on the basis that he was a victim of political persecution. His lawyer Irakli Zakareishvili later confirmed this to journalists, specifying that Akhalaia wants asylum in Greece.

“Since there has been intense political persecution against our family for more than a year and a half, every member of the family is strongly pressured by the current government, Data Akhalaia applied to one of the EU states for political asylum,” Nadareia wrote.

The lawyer says procedures for applying for asylum have been initiated.

Data Akhalaia is subject to a Red Alert through Interpol, which is the closest there is to an international arrest warrant.

The charges indicated on the Interpol website are “illegal deprivation of liberty, committed by a group’s conspiracy, using violence posing danger to human life and health; exceeding official power, committed repeatedly, with the use of violence, by insulting personal dignity of the victim.”

Georgian Dream, the coalition currently running the country, has for a year and a half denied that the clean-up among Saakashvili era officials is politically motivated, but Prime Minister Irakli Gharibashvili recently admitted that it puts undue pressure on the National Movement and announced a ‘moratorium‘ until after the local election on June 15.