Every third woman in Georgia has experienced domestic abuse

Every third woman in Georgia has experienced domestic abuse 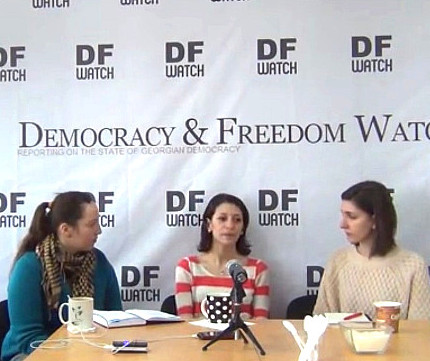 TBILISI, DFWatch–Every third woman in Georgian has been victim of domestic abuse, but it is not socially accepted to discuss it outside the family.

We sat down to talk about the problem with Salome Chagelishvili from Anti-Violence Network of Georgia (AVNG), an NGO which assists domestic violence victims, and Nana Chabukiani, who has done research on gender aspects in policy documents on domestic violence in Georgia.

According to World Health Organization, 30 percent of women worldwide who have been in a relationship report that they have experienced some form of physical or sexual violence by their partner. Globally, as many as 38 percent of murders of women are committed by their intimate partner.

In Georgia, every third woman has experienced physical or psychological violence in their families,  and one out of eleven women has been a victim of physical abuse. But still, it is generally thought that domestic violence is a private issue, which should not be discussed outside of the family. 78 percent of women support this idea, but almost a third of victims do not apply for help, as they feel too ashamed, embarrassed or afraid.

Their silence can in the most extreme cases cost them their lives. In 2014, 24 women were killed by their current or former partners. In 2013, there were 21 such victims.

The large number of women killed by their partners last year triggered talks about a rise of violence against women and ‘femicide’ in Georgia. However, Salome Chagelishvili thinks that it is just media and society giving more attention to the problem, and domestic violence is not on the rise.

She said that each year there are more and more women contacting AVNG for help, but the growing number of applicants does not mean that there are more victims, only that victims are not so afraid to speak out as before.

In her opinion, long years of campaigning for raising awareness about domestic violence is finally paying off: “Ten years ago, people were just laughing and saying that there is no such problem in Georgia, but now they agree that there is a problem, and victims don’t want to be victims anymore”.

Victims are afraid to get killed

However, Chagelishvili agrees that the majority of victims still are keeping silent. She thinks that it is not only because the society thinks that it is a private matter, but also because the victim lacks economic guarantees, they need a place to go to be safe. In addition, a lot of them are afraid that the abuser will kill them if they decide to speak out.

Researcher Nana Chabukiani added: “For certain women it is just normal that they are hit by their husbands or other members of their families.” In her opinion, physical violence is socially acceptable in Georgia, as it is normal to hit a child or to hit a spouse, and some women take it as a given.

The Law on Domestic Violence stipulates that victims of domestic violence has a right to stay in a state-run shelter for up to two months, or even longer in some cases. There are three state-run shelters: in Tbilisi, Gori and Kutaisi. In addition,  AVNG runs two shelters in Tbilisi and Akhaltsikhe where women can stay for up to three months or longer.

To get into a state shelter, a woman needs to have an official status as victim, which can, for example, be granted by the police. But to use an NGO-run shelter no official victim status is needed, thus AVNG shelters sometimes serve as a midway for women to state shelters.

And if women can not go to a state shelter after leaving AVNG shelters, they sometimes rent a house with others who share their fate. “But there are many cases when they have to go back to their abusive husbands, because of social and economic circumstances. Three months are not enough for a woman to start her life anew,” Chagelishvili added.

In her opinion, if legal documents made clear that although everyone can be a victim of domestic violence, most likely it will be a woman, this would allow for shaping state policies to better suit women’s needs and to combat domestic violence more effectively.