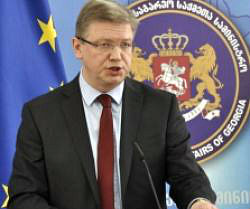 TBILISI, DFWatch–Georgia says negotiations with the European Union about the schedule and procedures for signing the Association Agreement must be finished in March.

“Both Georgia and the EU expressed readiness to sign the Association Agreement as soon as possible,” Panjikidze said.

She described the meeting as very interesting and said the two discussed EU-Georgia relations.

“We both work intensely in order to finish the necessary procedures.”

She continued saying that they spoke about the schedule and decided that the text of the document must be agreed on as soon as possible and be finished in March.

“This document is the main action plan for implementation of the agreement,” she explained.

Panjikidze said that in light of Ukraine’s experiences, Russia is expected to increase its pressure on Georgia before the AA has been signed.

As an example, she recalled that as soon as the Sochi Winter Olympics were over, Russians resumed the installation of barbed wires and fences along the South Ossetia boundary line in Georgian villages, and creating a so-called security line by moving the border with Abkhazia 11 kilometers, which she said must be abolished as soon as Paralympics are over.

“We expect such type of pressure and provocations,” she said.

Štefan Füle said the EU will stand by Georgia if there is pressure from Russia. He apologized that his visit was postponed for a day due to events in Ukraine and said he plans to meet with the president, government members, the opposition and civil society, as well as the Patriarch, during the visit.

Füle expressed support for Georgia’s territorial integrity and called on Russia to respect the sovereignty of a neighboring country. He said that as the international community is observing the events in Crimea, it must not lose sight of Russia’s actions in Georgia.