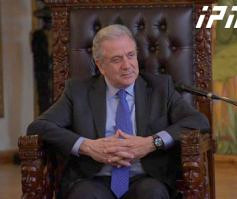 TBILISI, DFWatch–The EU’s commissioner for home affairs Dimitris Avramopoulos said Saturday that he is confident that the EU Parliament will support the proposed visa liberalization for Georgia.

After meeting with Prime Minister Giorgi Kvirikashvili, the commissioner for migration, home affairs and citizenship said it is very important to tell people that visa liberalization doesn’t mean that they will have the opportunity to get jobs in Europe.

But when the decision is made, Georgian citizens will no longer be forced to acquire visas but can travel to the Schengen zone for 90 days with biometrical passports. He added that it will be ‘a meritorious achievement’ for Georgians.

Georgia began negotiations with the EU about visa liberalization in June, 2012, and last December reforms and measures taken by Georgia were positively assessed in a report by the EU Commission, the Union’s de facto government.

Avramopoulos said he believes that visa liberalization will strengthen relations between people, stimulate business, social and cultural ties between Georgia and the EU.

Kvirkashvili expressed hope that the process will end happily within a few months and reminded Georgians that visa liberalization means permission for short trips to Europe, but does not mean permission to work in the EU.