EU speeds up signing of treaties with Georgia and Moldova

EU speeds up signing of treaties with Georgia and Moldova 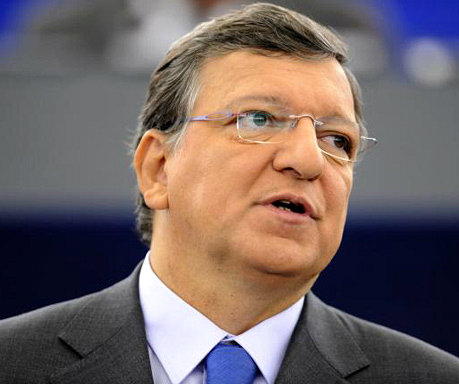 EU leaders will sign treaties with Georgia and Moldova no later than June 2014, Barroso wrote on Twitter. (Official photo.)

The move comes amid an escalating crisis in Ukraine, where there is a threat of unrest spreading in the eastern and southern parts of the country after Russia annexed Crimea.

According to the strong-worded statement by the EU’s top body dated March 20, the EU ‘reconfirms its objective to further strengthen the political association and economic integration with Georgia and the Republic of Moldova. We confirm our aim to sign the Association Agreements, including the Deep and Comprehensive Free Trade Areas, which we initialled in Vilnius last November, no later than June 2014.’

Earlier, it was envisaged to sign the agreement in August.

On Friday, Prime Minister Irakli Gharibashvili welcomed the EU’s decision to speed up the signing process, which was announced in a tweet by José Manuel Barroso, President of the European Commission.

‘Very happy we also agreed at EUCO to sign Association Agreement with Georgia & Moldova no later than June 2014,’ Barroso wrote on Twitter.

The EU lashes out at Russia for its role in Ukraine and reiterates its commitment to the country’s territorial integrity.

On Thursday, the EU stated its readiness to sign political provisions of the Association Agreement between the EU and Ukraine. The refusal of the ousted President, Viktor Yanukovich, to sign this agreement triggered mass protests in Kyiv and throughout Ukraine in November 2013, dubbed Euromaidan.

On Friday, Ukrainian acting Prime Minister, Arseny Yatseniuk and the EU represented by José Manuel Barroso and Herman Van Rompuy, President of the European Council, signed the political part of the Association Agreement.

Also on Thursday, the EC decided to cancel the next EU-Russia summit and urged member states to refrain from bilateral meetings with Russia.

The EU ’urges that an agreement be promptly reached on an OSCE mission to be deployed in Ukraine as soon as possible, in order to help stabilise the situation.’

Becides the rather belligerent tone in the EU’s statement, no specific sanctions against Russia are specified in the document besides steps to isolate the country politically.

Vaguely blaming Russia for destabilizing Ukraine, the EU statement threatens ‘additional and far reaching consequences for relations in a broad range of economic areas between the European Union and its Member States, on the one hand, and the Russian Federation, on the other hand. In this respect, the European Council asks the Commission and the Member States to prepare possible targeted measures.’