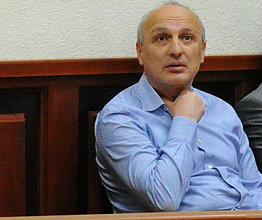 TBILISI, DFWatch–EU’s enlargement commissioner Štefan Füle has spoken by phone to the UNM Secretary General and former Interior Minister Vano Merabishvili, who is in detention waiting to face trial.

According to Merabishvili’s Facebook page, the European Commissioner for Enlargement and European Neighborhood Policy spoke with him during a visit to Georgia on July 12.

The two discussed many things, including the conditions under which Merabishvili is being held at Matrosov prison in Tbilisi.

Jacek Protasiewicz, Vice President of the European Parliament, visited Merabishvili in the prison, officially called Prison No 9, to personally familiarize himself with the condition in the jail.

Krzysztof Lisek from the European People’s Party said after meeting Merabishvili that he doesn’t see any reason, other than political, for Merabishvili being in preliminary detention.

He also said he is surprised that Merabishvili was asked by law enforcement bodies five times to appear for questioning, and even though he was abroad he came back to Georgia for questioning. This, he reasons, must mean that there are political grounds for his detention.

Lisek also noted that he met Merabishvili six weeks ago and that he has lost weight. He thinks the doctors should examine him.

Five members of the European Parliament’s defense and security committee visited Merabishvili Wednesday. They expressed concern that his family is not allowed to visit him in the prison.

Merabishvili is charged with having falsified evidence to obscure the truth regarding the murder of a bank employee in 2006; a case which the European Court of Human Rights ruled against Georgia in one of the most damning verdicts issued against the country. He also faces several other serious charges.