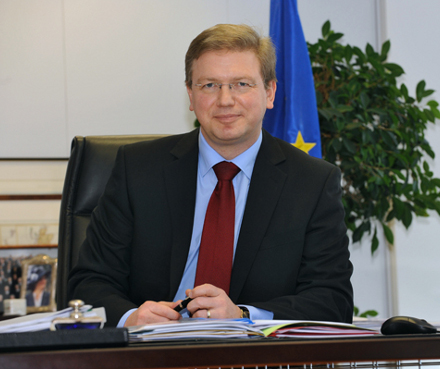 Štefan Füle, EU commissioner for enlargement, welcomes the engagement by groups in Georgia in the party financing issue. (Official photo.)

TBILISI, DFWatch – Štefan Füle, the EU’s commissioner for enlargement, promises that the upcoming parliamentary elections in Georgia will remain a high priority on the EU’s agenda.

He says they are paying particular attention to the newly adopted law on political unions of citizens and ‘have asked for clarifications from the Government of Georgia on the potential negative consequences on this law on freedom of expression and freedom of association and the activities of civil society.’

51 organizations in Georgia appealed to Štefan Füle in March for support in relation to the party financing rules, which were changed in December, 2011. The changes to the law on political unions of citizens were controversial and led to a series of street protests, public meetings and a campaign called This Affects You too – which means that the amended law imposes criminal responsibilities even for voters.

“Current regulations deteriorate the election environment, limit civic activity, property rights, freedom of expression and political activity, while can impose severe and unjustified responsibilities on voters, resulting in a chilling effect on freedom of speech and civic engagement,” says the letter which was sent to Štefan Füle in March, 2011.

Parliamentary elections are scheduled for October 2012. Within the frames of the campaign, local non-governmental organizations held negotiations with lawmakers at the parliament and achieved some progress, which resulted in the preparation of a new set of amendments.

“I am encouraged to hear that the Parliament of Georgia has stepped up consultations with civil society in this regard,” Štefan Füle writes in his response to Georgian National Platform. He positively rates Georgia’s civic activism and also government’s step to call for a ODCE/ODIHR mission to Georgia.

“My firm belief is that a strong civil society is required in order to transform and modernize societies and to build deep democracy,” Fule writes.

Ketevan Tsikhelashvili, head of Georgia’s National Platform Coordination Council, thinks the EU’s readiness shows that it is committed to supporting a fair and competitive election environment in Georgia for the upcoming elections in October, 2012.

The government’s aim with adopting the controversial new legislation was to prevent corruption and make the election environment transparent. It applied a number of restrictions and prohibitions for political parties and subjects, but also for legal and individual persons, and imposed criminal law responsibility on voters for, as it is called, receiving bribes from political parties during the election year.