EU ambassador: Georgian business will not be served breakfast in bed

EU ambassador: Georgian business will not be served breakfast in bed 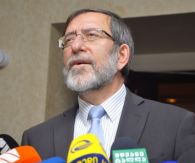 TBILISI, DFWatch–EU Ambassador to Georgia Philip Dimitrov says business in Georgia will have to do a lot and is not going to be served breakfast in bed after the signing of the association agreement.

Speaking at a conference in Batumi, Dimitrov told journalists that Georgia took a historic step by signing the association agreement with the EU, but this is not the end of the road, it is opening of the new opportunities for the country.

From now on, Georgia has an association agenda to fulfill, he said, and this will mean many processes to implement, some of them by the end of the year.

Dimitrov, who was attending the eleventh international conference Georgia’s European Way, said that Georgia will get immediate benefits from the agreement, but this doesn’t mean that business will be served ‘breakfast in bed’.

It means that with the deep and comprehensive free trade agreement, Georgia will be ‘armed’ with modern instruments, but it will also require much efforts by Georgia.

EU signed an association agreements with Moldova, Georgia and Ukraine on June 27. A handful of EU members states have ratified the document. Georgia plans to ratify it on July 18.