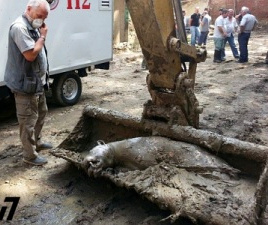 TBILISI, DFWatch–A tiger which escaped from Tbilisi Zoo during a flood three weeks ago has been found dead at a leisure park a few hundred meters from the zoo.

The discovery of the dead Siberian tiger “Salima” at Laguna Vere concludes the search for dangerous predators that escaped at the night of the flood.

Director Zurab Gurielidze told journalists on Sunday that the zoo is not looking for any more predators.

Salima was found in the same place as where a white tiger attacked and killed a man a few days after the flood.

The carrion was covered in mud near a warehouse.

The June 14 flood took the lives of at least 19 people, while three are still missing. The zoo was hit by a tsunami-like wave which covered part of it in mud, killing most of the animals. Wolves, tigers and other dangerous animals escaped into the city streets and were hunted down by authorities. A hyena and tiger were missing, but both were later found dead.

People involved in clean-up work at Laguna Vere have been complaining of a horrible smell there for several days.