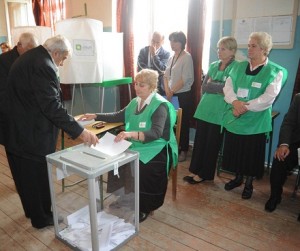 Tbilisi, DFWatch – The head and other senior staff members of the Central Election Commission of Georgia have been accustomed to get enormous bonuses, according to the recent report by ISFED, a Georgian NGO focused on monitoring electoral processes in Georgia.

“Analysis of the statistical information revealed a number of important trends – total amount of supplementary pays and bonuses paid to the CEC chairs equals their wage,” the report states.

Zurab Kharatishvili, who chaired CEC from January 2011 to September 2013, totally received 320,271 laris in this period. Out of this 90.5 percent are bonuses.

ISFED held presentation of the report on Tuesday publishing documents about salaries and bonuses/’supplementary pays’ in CEC from 2011 to 2015. The organization recommends establishing limits for bonuses and other forms of monetary prizes as well as periods of receiving them, and clear grounds for eligibility.