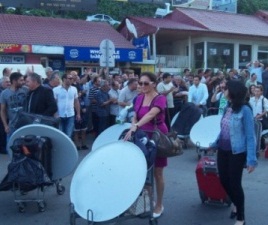 Georgians living abroad returned to their homeland Monday to fight for their right to vote. Some brought satellite dishes. (IPN.)

TBILISI, DFWatch – Georgian emigrants Monday returned to their homeland to protest the restriction of their right to vote.

A number of Georgian emigrants today arrived in Batumi, a port city on the Black Sea coast, and held a protest rally in front of a public building, local media reports.

Their main concern is that they have too little time to register for the election. Participants at the rally bought satellite dishes on their way home to Georgia to give it to their relatives here, because thousands of satellite dishes were seized by the government and they think people need to have access to TV channels. Cable TV subscription is not widespread in Georgia.

Maya Sastsraposhvili, who is an actress and singer in Austria, told journalists that she did not get a chance to register for the parliamentary election on October 1, so she decided to come to Georgia.

She asks to be allowed to register.

“We are told that the registration is over and there are some problems, but there are no problems. It’s our legal right to vote,” she says, adding that emigrants living abroad decided to gather in one country. They chose Istanbul, as it was easy for everyone to get there. They bought satellite dishes in the same city and brought them to Georgia.

“All normal people should watch what they desire and what they like in the 21. century,” the actress says.

Rally participants were joined by their relatives in Batumi and also representatives of the opposition.

Several more buses of emigrants are expected to arrive Tuesday.

The limited time to register is not the only problem emigrants have had. Another problem is a new rule which requires them to present documentation of their place of residence together with an ID in order to register. Up to a million Georgians are living abroad illegally, and will be unable to present proof of residency.

The Central Election Commission later explained that illegals may go through a so-called preliminary registration by only showing a valid ID which will allow them to vote, but many emigrants still didn’t manage to register in time.