Either school or hijab – “my daughters will not go to school without hijab!”

Either school or hijab – “my daughters will not go to school without hijab!” 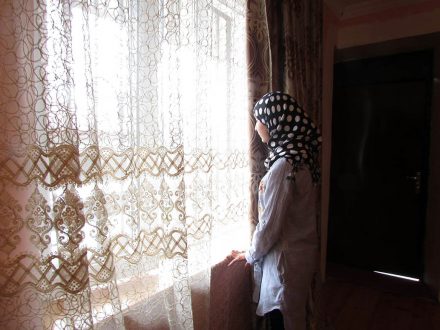 According to official statistics 10,7% of the Georgian population – about 399,000 persons – are Muslims. 333,000 of them are ethnic Azerbaijani. Part of them thinks that in accordance to the Muslim tradition, a girl shall wear a hijab over 14.

“I want to learn and become a teacher. If I do not study, I know in future I will have hard life. I was not allowed into the school because I am wearing a hijab. I do not know what will happen now. I want to go to school together with my class-mates,” said 13-years-old Aysha, who lives in Karajala village, Telavi municipality. School director Elza Ashurova did not allow her into the school because of the hijab.

“I have nothing against the religion and Muslims. The school has its internal regulations, and one of its rules bans students to enter the school facilities with a cap, a head kerchief, glasses, a scarf and other kerchiefs,” Ashurova said.

The school director added that the family demands Aysha to wear the hijab. “Traditionally, women living in Karajala do not wear hijab. Last year, neither Aysha was wearing the religious head kerchief. Besides that, this year she refused to attend sports and music lessons. When I asked her the reason, she said that father forbade her. It is very important for me that the child received education. I will try to negotiate with her parents and resolve this problem somehow.”

According to official statistics 10,7% of the Georgian population – about 399,000 persons – are Muslims. 333,000 of them are ethnic Azerbaijani. Part of them thinks that in accordance to the Muslim tradition, a girl shall wear a hijab over 14.

Aysha’s parents blame the school direction in the violation of the religious rights of the girl. “It is not true that I am oppressing the daughter. She is growing up in a religious family and knows that she must wear a hijab after she turns 14. Aysha is a good student. On behalf of the school she participated in many competitions and gained many prizes and awards. I want my daughter to get education. It was our main purpose why we made this issue public. Do you see these roads?” Aysha’s father Tahir asked and showed the wounding roads of the village –“it is impossible to walk there in winter. I used to put Aysha on my shoulders and took to school. It is my obligation to teach the child and the director shall not create obstacles.”

14-year-old Miranda was refused to go to school with hijab in Karajala village school last year. “Since then I am not going to school. I want to learn like my classmates do,” Miranda said.

Miranda’s sister is 13, Elvira. Before going to school she takes off the hijab and leaves at home. “Father allows me to go to school without hijab because I am still 13. I want to graduate the school. Unless they allow us to go to school with hijab, next year I will also have to stop education and stay home,” Elvira said.

Nodar, the father of Elvira and Miranda, told us that he will not allow her daughters to go to school without hijab.

The Ministry of Education and Science reacted to the incident in Karajala public school with the statement. It reads that “in accordance to the legislation, any public school shall have internal regulations, which regulate the life in the school. In accordance to the rules which were elaborated in the Karajala public school through consultations with the parents, and was approved by the Council of Trustees, teachers and students are forbidden to wear any head kerchief in the school. It is a pity that general rule on the prohibition of the head kerchief was clarified as restriction of freedom of religion. The Ministry calls on the parties to refrain from discussing the issue on religious grounds and work on peaceful solution of the problem.”

Before Karajala, similar incident happened in Mokhe village, Adigeni municipality. Director of the Mokhe public school requested the Muslim school-girl to attend classes without hijab. The Public Defender of Georgia also reacted to this fact. He even sent proposal to the Ministry of Education. The Ombudsman stated that “such a request does not stem from the legislation of Georgia and unjustly restricts the student’s freedom to express her religious identity.”

Is the right of the child to freedom of religion breached or not?

There is no clear answer to this question in Georgia. There is no common approach to this issue in the world: it depends in which country the freedom of religion is restricted and what kind of legislation it has. However, there is one similar case and judgment of the European Court of Human Rights. For example, the case Leyla Sahin vs Turkey. In February 1998, the Istanbul University administration warned the students they will not be allowed to attend the lectures if any of them wear religious head kerchief or long beards. Leyla Sahin was the fourth-year student of the Medical Faculty. After she refused to go to the university without hijab, she was not allowed into the audience and exams. Leyla concluded that her freedom of expression was violated and appealed the ECtHR. The Court ruled that freedom of religion was really violated but it was proportional restriction and coherent to the law, main purposes of the state and the university – to ensure secularism in the country.

The parents from Karajala are not going to appeal the court. While it is discussed in Georgia whether public schools violate freedom of religion of children, and the Ministry of Education is waiting for the “peaceful solution of the problem,” two girls from Karajala – Aysha and Miranda are left without the school and possibility to study.