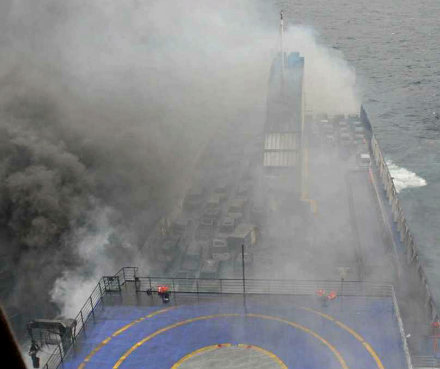 TBILISI, DFWatch–A ferry which caught fire on December 28 in the Adriatic Sea, was carrying eight Georgian citizens. According to Italian media there were 478 people on the ferry, including the crew.

At least eight people have been killed in the fire aboard MS Norman Atlantic, a roll-on/roll-off passenger ferry built as recently as 2009 and owned by Visemar di Navigazione.

Georgian Ambassador to Italy Vakhtang Andghuladze told Rustavi 2 that five of the eight Georgians on board were rescued and taken onto another ship.

“We have information that there is a cleric among the Georgians. We are in constant contact with the ship and we will have more details later.”

The evacuated passengers have been sent to Italy, Greece and Albania.

The Foreign Ministry is familiar with the identities five of the Georgians and working to identify the rest and finding out where they were evacuated to, head of the ministry’s Consular Department Giorgi Tabatadze, told journalists.

According to the most recent information, 290 people have been evacuated, while 188 remain on board.