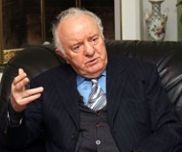 Shevardnadze was minister of internal affairs of the Georgian Socialist Soviet Republic from 1967, making his mark fighting corruption, and in 1972 becoming first secretary of the Georgian Communist Party and leader of Georgia.

In 1992, after the breakup of the Soviet Union, there was a coup in Georgia, and Shevardnadze became chairman the State Council, and later speaker of parliament, serving as the actual leader of the country.

From November 26, 1995, Shevardnadze was president and served in that post until he was deposed in the bloodless coup called the Rose Revolution in November 2003.

Shevardnadze was born on January 25, 1928, in the village Mamati in the Guria region, and died in Tbilisi today, July 7, aged 86.